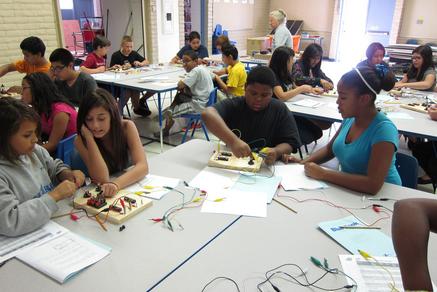 The Arizona Science Lab operates under the management and partial funding of The Institute of Electrical and Electronics Engineers (IEEE). The IEEE is the largest professional engineering association in the world: 400,000 members in 150 countries. It is a 501(c)(3) organization incorporated in New York state. The IEEE is divided into Regions 1 thru 10, and each Region is divided into Sections; the Phoenix Section is in Region 6, the South Western United States.

Since February 2009, the Phoenix Section has run a Teacher In Service Program / Engineers In The Classroom (TISP/EIC) “Arizona Science Lab” activity with a focus on grades 4 ‒ 8 in the Phoenix Metro area. The AZ Science Lab serves the needs of underserved students in low performing schools: Arizona Department of Education category “C” and “D” or Federal Government “non-AYP” and Title 1 schools. In addition, the lab also serves many gifted schools, multi-grade classes (i.e. Montessori), and has conducted workshops for the Phoenix School for the Blind.

According to the U.S. Bureau of Labor statistics, a strong science-math foundation is essential for the future workforce. There is a growing concern that not enough students are adequately prepared to enter into the fields of science, technology, engineering and mathematics (STEM). Based on the most recent National Assessment of Educational Progress, only 29% of 4th grade students tested as proficient or above in science.

Arizona students rank 35th in the nation according to standardized testing in science and math. The IEEE TISP/EIC program is a response to this and to the rapidly decreasing number of students who opt for STEM degrees and careers. The IEEE recognizes that a large part of the problem is the lack of the students’ exposure to real, hands-on, project-based science activities or the encouragement of students who might have an interest in STEM. Studies show that if students are not exposed to STEM projects before high school, it might be too late to generate interest. We find that many students lack an understanding of the engineering involved in the creation of many devices.

The TISP/EIC “Arizona Science Lab” program addresses this problem very directly by implementing fully provisioned project-based science workshops for grade 4 ‒ 8 students and providing them absolutely free of any charge to the schools, teachers and students of Arizona.